Home » Main menu » A walk in the town 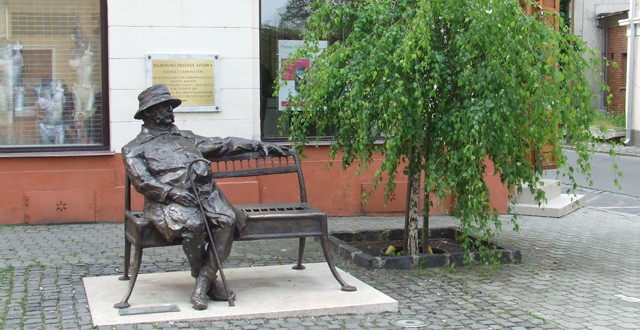 A walk in the town

The town is situated at the confluence of the Rivers Mosoni Danube and Lajta, 80 kms from Vienna and 30 kms from Bratislava, at the meeting point of the north-south and east-west highways. In Mosonmagyaróvár the switchback narrow streets of the historical downtown, the castle with the agricultural university, the walkways along the river Lajta and the cozy squares await the tourists visiting our city. The location of the settlement was designated by the economical and geographical conditions. It had already been a military settlement under the name of ?Ad Flexum?. After the Hungarian conquest it became a bailiff, later a county seat, and then the route of grain and animal shipments going from the Plains to Vienna. Moson and Magyaróvár were united in 1939, they- together with Lucsony connected to Magyaróvár in 1905- now from the present town 32,000 inhabitants. The earth fortress of Moson had been demolished by King Ottocar of Bohemia in 1271 and it has never been

rebuilt. After the devastation of the Tartars, the castle of Óvár was fortified, and the importance of the civil settlement near the fortress also increased. Magyaróvár was granted the title of town by the mother of King Louis the Great of Hungary in 1354. It became a Habsburg property from 1763 until 1945. The Turkish troops devastated it several times on the way to Vienna, they also burned it repeatedly. It was occupied by Napoleon?s soldiers in 1809. Meanwhile Moson was the large agricultural village of the wealthy merchants. The population of the two settlements grew suddenly due to the industrialization.

The Magyaróvár castle – a building with a ground-plan shaped as an irregular quadrangle – was built onto the ruins of the Roman settlement in the 13th century and fortified in the 16th century. In 1818 Duke Albert Casmir of Saxon Teschen, son-in-law of Maria Theresa (Queen of Hungary), founded an agricultural college here. Its legal successor is the Agricultural University, housed by the fortress today as well. The two busts which can be seen at the entrance of the castle building raise a memorial the founder and the first headmaster, Antal Wittmann. In the exterior castle yard there stand monuments for the respect of the 1st and 2nd world war and of the revolution of 1956. The Castle cellar and Castle-lake in Mosonmagyaróvár is a center for exhibition, education, recreation and tourism, opened in May 2008.

The area between the Castle Lake and the Wittmann Park with the plants from the Szigetköz is now a nature protection exhibition area. The Austrian poet, Nikolaus Lenau studied at the Academy in the years 1822-23, his bust and the hewn stone bench guarding his memory can still be seen in the courtyard. On the walls of the castle there are stone portraits of the noted tutors of the institute. Part of the university is the building beside it, built at the beginning of the 20th century, graced by the court from the 1980s. In 1713 the Saint-Ann Chapel was erected from offerings. On the corner of the Lucsony utca stands the institute of the university for biotechnology and professional development, housing international conferences. The palace of the Habsburg princes ? a one storey building ? is found on Deák Square; István Széchenyi was lodged here in October 1847, and it was from the window of the balcony room that Lajos Kossuth called upon the peasants of Moson County to fight in the War of Independence of 1848-49 in October 1848. The renewed archduke castle houses a guesthouse and a Piarist religious house in our days.The sitting sculpture of Friedrich Habsburg on a wedlock bench can be found beside it.

The gem of the square is St. John of Nepomuk?s Baroque statue consisting of three figures and erected in 1744. If you continue walking on Main Street, you can find three beautifully restored houses with Baroque facade beside the one time house of Nicolaus Lenau. The former county hall ? today?s Town Hall -, located in the neighborhood, was built in 1891 in Neo-Renaissance style. The Piarist school originally consisting of two buildings extends opposite to it. The first high school of the city was founded in 1738. The jewel of the town is the Cselley House, housing the Industry History collection of the Hanság Museum and the Gyurkovich collection. There had been a Romanesque church on the site of the present St. Gotthard Church in Magyaróvár, the earlier one having been destroyed in 1529. The foundations of the present one-nave, one tower church were laid in 1668. Its interiors (Baroque main altar and paintings) were made in the 1770?s. Prince Frederic of Habsburg and his wife, Isabelle were buried in the crypt. The Saint Ladislaus-sculpture beside the church ? creation of Ferenc Lebó ? came true with the help of public subscription. The so-called Europe-stone ? a work of Nagy Benedek ? is situated opposite to the Evangelical church, on the pedestrian and shopping street of the city, on the Magyar utca.

It was inaugurated in 2004, on the 650th anniversary of the town. The Hansági Museum, one of the first founded museums in the country, stands opposite to the Town Hospital along the road leading from Magyaróvár to Moson since 1911. Heading to Moson, we can see on the Szent István Street the reformed church, built by Szeghalmi Bálint, in style of the Transylvanian wooden churches, in 1940. Besides the houses on the main street of Moson, built in Classicist, late Romantic and Rococo style you can find Baroque ones as well. The one-time house of the world-famous violinist and music-pedagogue, Károly Flesch is ornamented with a memorial relief. The Rozália Chapel is a devotional place, built at the beginning of the 18th century, in commemoration of the cessation of the plague epidemy.

The Roman Catholic Church of Moson, the St John of Nepomuk?s was built in Baroque style in the 1750s, and it received its Neo-Barogue facade at the beginning of this century. The sculpture of King St. Stephen in front of the church was inaugurated in 2000, for the respect of the millennium. The Rudolf-grove along the Moson Danube awaits in pleasant environment those who come here for relaxing or to do sports. The Gyásztér (Mourning Square) can be found in Ipartelep.
There is a symbolic cemetery on this square erecting a monument to the memory of the victims of the volley in the 1956 revolution created by Tibor Riegler.
2010-05-25
admin
Previous: Tourism Information Office
Next: Hansági Museum